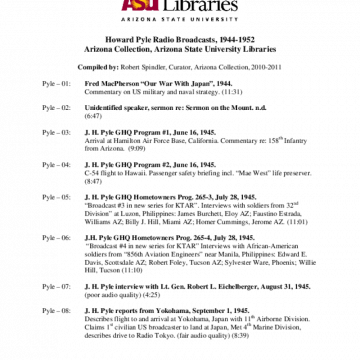 A collection of thirty-seven brief interviews and news stories primarily regarding actions of the United States military in the Philippines during World War II.

Interviewees include General Douglas MacArthur and Lt. Gen. Robert L. Eichelberger, as well as radio personalities Fred MacPherson, Frank McCall, Ben Grauer, and Mucio Delgado. Hometowner programs include interviews with several soldiers, nurses and WACS from Arizona serving in the vicinity of Manila and Luzon. Pyle's 1952 Republican National Convention speech "What is Right For America?" is presented along with coverage of the 1945 United Nations conference in San Francisco. Pyle's coverage of the General Yamashita surrender ceremony of September 1945 may be the only such audio recording in existence. Detailed descriptions of each recording are also included.

The collection of interviews were digitized from vinyl audio transcription discs in 2010-2011 and 2015 with the generous support of the Luhrs Family Endowment. These recordings are a part of the Howard Pyle Collection described at Arizona Archives Online.

Our War with Japan