The Carlos Montezuma collection contains several digitized volumes of the Wassaja newsletter that Yavapai intellectual and activist Carlos Montezuma, MD (1866-1923) self-published during the years 1916-1922. Wassaja means “signaling” or “beckoning,” and is Montezuma’s Yavapai birth name. The newsletter was a vital source of news about Indian affairs in an era that had few outlets for such information and contains valuable reports directly from people living within the Indian reservation system. As a prominent figure in the struggle for Indian rights who played a role in the founding of the Society of American Indians, Montezuma was an intellectual leader against Indian Bureau mismanagement; he was notorious for advocating an end to the reservation system and the abolition of the BIA. This collection helps to document different facets of Montezuma’s career as an Indian rights leader and his relationship to his home community of Fort McDowell. 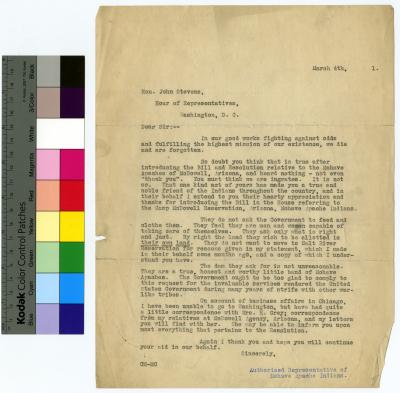 Letter From Montezuma to the Hon. John S ...

Envelope Addressed to the Honorable Thom ...